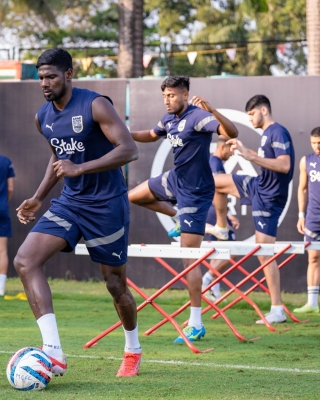 Guwahati: The upcoming game of Indian Super League (ISL) 2022-23 will showcase a contrasting matchup as NorthEast United FC, which is the only team without a point in the ongoing season so far, take on Mumbai City FC, who are unbeaten till now, at the Indira Gandhi Athletic Stadium, here on Thursday.

Interestingly, the recent head-to-head is in favour of the Highlanders as Mumbai City FC enter this match to end their previous four-game winless run against NorthEast United FC and grab the top spot.

An extended break may have helped NorthEast United FC to recuperate and rethink their tactics. Marco Balbul’s men thought they had nabbed the season’s first point at the Salt Lake Stadium against ATK Mohun Bagan FC, only to see it snatched away at the end. This is the Highlanders’ worst run in the history of the ISL.

Another loss would see NorthEast United FC break the longest losing streak record in the league set by former ISL side Delhi Dynamos in the 2017-18 season. Dodging this will be a herculean task for the Highlanders as Mumbai City FC are flying high after scoring ten goals in their last two games.

NorthEast United FC signed Colombian striker Wilmar Jordan earlier this week, who will be in the squad for this game but is unlikely to play as head coach Marco Balbul said his team would be patient as Jordan builds up his fitness.

“Mumbai are one of the best teams in the league and are in their best shape now. They have scored ten goals in the last two games. To stop them, we need to be very organised and compact in defence,” said Balbul.

Mumbai City FC have their eyes on the top spot after Hyderabad FC’s unbeaten streak came to a stuttering end last week. The Islanders are now just a point behind the defending champions and could go top of the table with a win over NorthEast United FC.

Head coach Des Buckingham is expected to stay with his routine of not switching up his starting XI too much. Despite NorthEast United FC’s poor start, Buckingham said his team isn’t looking at the statistics and underestimating their opponents.

“We have watched all of NorthEast’s games, especially the recent ones. They haven’t yet registered a point, but the performances they have put in have kept the score lines tight,” said Buckingham about his opponents.

“We don’t look at being unbeaten. We try to get better in every game. We will give this fixture the attention and respect it deserves, just like how we have done with all teams that we have faced so far because if we don’t, it could be a very difficult evening for us,” he added.

The two sides have met 16 times in the ISL. Mumbai City FC have won seven times, while NorthEast United FC have won on five occasions. Four games have ended in a draw, with two coming last season.

Our ambition is to invest and grow the game in India, vows Roel de Vries