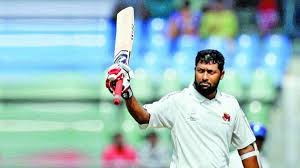 Bhubaneswar: Cricket legend Washim Jaffer has been appointed as coach of Odisha Cricket team till 2023.

This has been informed by Subrat Behera, CEO of Odisha Cricket Association.

Jaffer will take charge in the last week of this month.

The Mumbaikar has represented India in 31 Tests between 2000 and 2008, scoring 1944 runs including five hundreds and 11 fifties.

He also has a double hundred to his name — a highest score of 212 against West Indies in 2006 at St John’s. He played two ODIs for India.

Jaffer had announced his retirement from international and first-class cricket last year.