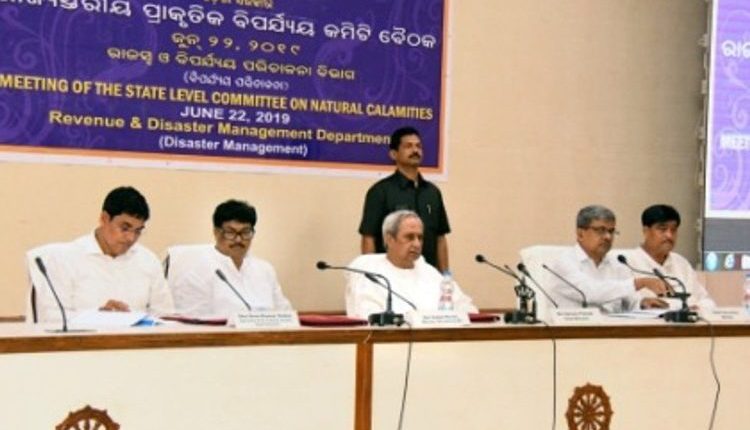 Bhubaneswar: Chief Minister Naveen Patnaik has called for complete preparedness for any eventuality – be it floods or drought. Though the monsoon has set in the state, and it is expected to be normal, there should not be any inadequacy in attention.

With this, the departments concerned should be cautious and take steps to identify and repair the weak river embankments as early as possible and keep an eye to deal with any unforeseen situation. Speaking at the meeting of the State Level Committee of Natural Calamities, the Chief Minister has urged this to the heads of the departments and the people’s representatives.

The state suffered heavy losses due to cyclones Titli and Fani. The government’s preparedness before these natural calamities for disaster mitigation brought international laurels and recognition for the state.

Odisha has created an international standard in disaster management. Likewise, there should be total preparedness before the Monsoon rains lash and create any flood like situation in the state. In view of this, river embankments should be repaired and adequate sand bags should be kept ready.

The Chief Minister has also instructed the officials to store temporary building materials in case of emergency.

Speaking on the occasion, Revenue and Disaster Management Minister Sudam Marandi has said that the government has taken adequate steps to mitigate the calamities.

The Chief Secretary had convened a meeting in this regard on the 29th June and the Special Relief Commissioner had a meeting with the district emergency officers.

All district officials have been asked to give daily reports from June 1st to October 15th regarding any issue related to natural calamities and loss thereon.

The state has identified 86 weak river embankments which are being repaired and adequate sand bags are being kept ready, the minister said.

Naveen Bats for Total Citizen Centric Governance; To Monitor Implementation of 5Ts Himself